Christchurch Bandstand is located at Christchurch Quay. The Quay commonly being called the Quomps Recreation Ground or “Quomps” as known by locals and is Grade II listed.

The bandstand is listed under the Planning (Listed Buildings and Conservation Areas) Act 1990 as amended for its special architectural or historic interest.

The bandstand is owned and managed by the Town Council and can be booked for charitable and/or community events; performances such as recitals for song and dance and any queries can be directed to the Town Clerk.

Enquire about the bandstand 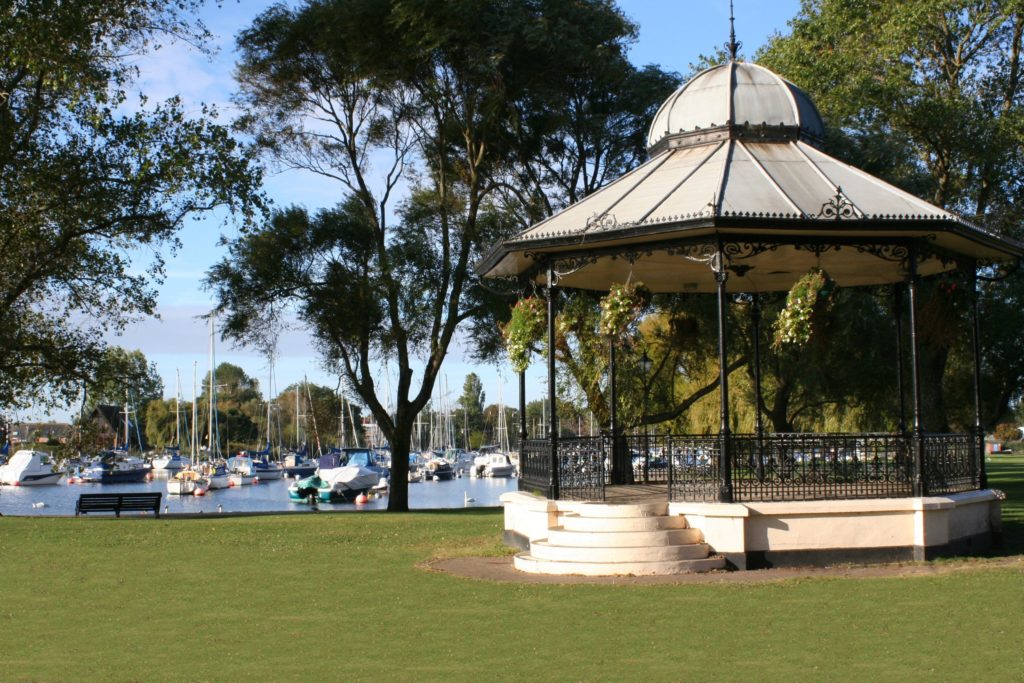 In early 1934 ex-Councillor Jesse Spencer, I’m sure no relation to our current Councillor Spencer, put a notice in The Christchurch Times appealing for subscriptions to fund a new bandstand.  Unfortunately, on 24th February he wrote to the paper cancelling the scheme and promised to return any monies already donated.

He finished his letter “if subscriptions had been as plentiful as advice, it would have been a success”

This seemed to put an end to the matter but in 1937, to celebrate the coronation of George VI an anonymous donor gave £300 towards the project, an equivalent in today’s money of over £17,000.

In October that same year a design was approved by the benefactor and the Lion Foundry at Kirkintilloch was selected, the design noted for its highly decorative architectural ironwork.  By April workmen were constructing the foundations as the sectional portions were in transit from the foundry near Glasgow.

The new Bandstand was opened at 7:30pm on Friday 25th June 1938 by the Mayor Councillor H.E.W. Lapthorne describing it as “a new home for the town band”.

Mr David Llewellyn, Chairman of the town band and General Manager of the West Hants Water Company seconded the vote of thanks to Major Harris citing the difficulties faced financing a Town Band and asking for increased support from residents.   In this respect he fared little better than ex-Councillor Spencer, for although Christchurch has a fine bandstand, it has lost its town band.

So who was the anonymous benefactor?  Whilst speculation as to the funder was rife, residents had to wait a further 16 years before finding out who had made the sizeable donation.

In his obituary, published by The Christchurch Times on 29th October 1954, it was revealed that the mystery benefactor was none other than Mr David Llewellyn, Chairman of the town band.

I don’t know whether Mr Lewellyn would have enjoyed jazz, but I am sure he would be absolutely delighted to see so many people enjoying good music emanating from the bandstand that he helped to pay for.

Christchurch Local History Society, one of the largest local history societies in the Country, hold an extensive archive relating to Christchurch.  It has an excellent journal and a programme of monthly talks running from September through to April held at the Christchurch Junior School in Clarendon Road. For more information see the website www.historychristchurch.org