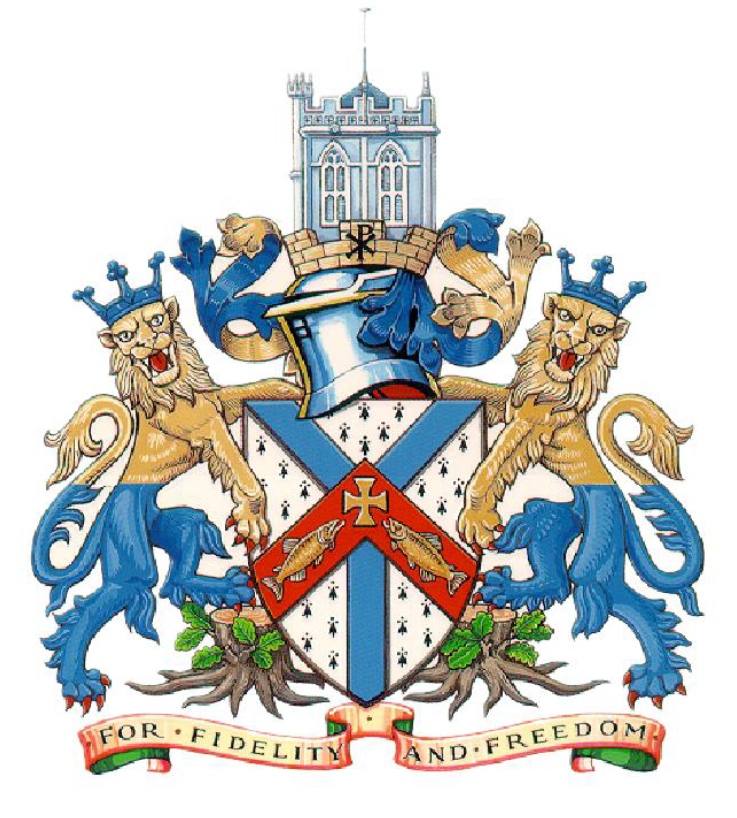 Christchurch was formally granted its Coat of Arms on 15 December 1970. The charges payable in obtaining the grant of Arms were very generously met by Mr Fred Pontin (who was conferred with the title of Honorary Freeman on 05 February 1974). In recognition of his generosity a painting of the Arms by the official artist of the College of Arms was presented to him by the then Mayor (Councillor J S C Morgan) on 20 January 1971.

The design work was undertaken by the Richmond Herald of Arms, Mr J P Brooke-Little, MVO, MA, FSA in consultation with the Borough Council.

The Coat of Arms comprises an ermine background which refers to the fact that Christchurch was an early Royal Borough in the time of King Alfred, a blue palium representing the confluence of the Rivers Avon and Stour and a red chevron alludes to the ancient bridge over the River Avon and to the Bailey Bridge (which was first designed and originally produced at the Military Experimental Bridging Establishment in Barrack Road, Christchurch by Sir Donald Bailey). The salmon on the chevron are for the important ancient fishing industry.

The town’s close association with the Priory Church is shown by the cross form at the apex of the chevron and by the crest, which shows the north face of the west Tower of the Priory Church placed in a mural crown (denoting the status of Municipal Borough) with the Chi-Rho monogram which means Christ (Greek letters used since Roman times). The Helmet is a close great helm correct for Boroughs as is the mantling which is purely decorative and echoes the two colours of the supporters. The supporters are the lions of England (Gold) and Redvers (Blue) – half and half, the earliest charter of the Borough being granted by Baldwin de Redvers. They wear Saxon crowns to refer to the Saxon origins of the Borough and rest their hind paws on tree stumps, to show the proximity of the New Forest.

There is also a Badge composed of a silver ring enclosing a blue pallium and gold chevron and surmounted by a crenelated wall.

The motto “For Fidelity and Freedom” was selected by the Council from over 60 suggestions submitted by local residents.

As a result of the Local Government Act of 1972, the then Borough of Christchurch was abolished and the District of Christchurch was established from 01 April 1974. As mentioned under the section on “Civic History” the new District was granted the status of Borough by a Royal Charter. The 1972 Act made provision (Section 247) for a “new” Local Authority created by that Act to bear and use Armorial Bearings borne and used by a “constituent” authority before 01 April 1974.

The transfer had to be effected by Her Majesty by Order in Council and it appears that the Section was interpreted very strictly by the College of Arms and such “transfers” of Armorial Bearings were only authorised where the “new” and “constituent” local authorities were identical or only differed in minor respects.

The new Borough was essentially identical to the previous one, other than it had been enlarged by the Parishes of Burton and Hurn, and therefore by the Local Authorities
(Armorial Bearings) Order, 1976, which took effect from 21 June 1976, the right to bear and use the armorial bearings previously borne and used by the former Christchurch Borough Council prior to Government reorganisation was conferred on the new Borough.

The Coat of Arms has been framed and is displayed in the Council Chamber at the Civic Offices, Bridge Street.

A Local Authority cannot authorise other persons or bodies to use their Armorial Bearings as this would (strictly) be a usurpation of the Royal Privilege to grant Arms.

A transfer for the right to bear and use the armorial bearings previously borne and used by the former Christchurch Borough Council prior to Local Government reorganisation has been conferred on the new Town Council. This conferral took place on the 12th day of August 2020 by Her Majesty’s Royal Licence and Authority.